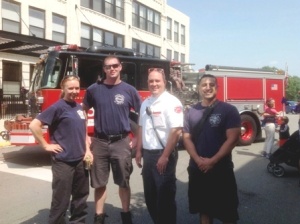 This was the 3rd year for the annual 4th of July University Commons Kids Parade, but the great excitement was the expansion of the parade to include our University Village and University Loft neighbors!

Approximately 150 kiddos, parents, aunts, uncles, grandparents  joined in the parade, along with some patriotic pooches!

Red, white and blue outfits adorned the littlest ones and each child was given a pin wheel decorated with stars and stripes! They rode in strollers, wagons, trikes, bikes and scooters.  The parade which starts at 15th and Morgan goes down one side of the street to Racine and then back up  the other side.  We had the presence of the UIC Police and they joined in walking  the parade.  How cool was that! Lots of pictures with the police officers.

As the parade ended everyone enjoyed popsicles!

Then the surprises occurred!

UIC’s paddy wagon arrived and the kids were able to explore it.  Thank you UIC officers! So much fun.

A few minutes later the FIRETRUCK appeared!! WOW!!! Kids in the cab, kids sitting on the front, kids on the back, kids climbing all over.  Pictures, pictures and more pictures.  Memories to hold on to.